Preserving the past and ensuring a bright future.

The Collections Research Center (CRC) is the nation’s leading maritime research facility. Located across the street from Mystic Seaport, the former J. Rossie Velvet Company houses the Museum’s collections and offers safe and easy access to maritime researchers and scholars. Artifacts at the CRC include more than two million examples of maritime art, artifacts, tools, buildings, imprints and other documents, photographs, 1,000 ships registers, 600 audiotaped oral history interviews, 200 videotaped interviews, and 1.5 million feet of historic and contemporary maritime-related footage. The CRC opened in the fall of 2002 and was designed to exceed national museum standards for conservation, preservation, accessibility, and safety. The research center provides cutting-edge temperature and humidity control for the Museum’s artifacts and also boasts audio/video production suites and extensive photo processing and digitizing labs.

News From the Collections

A New Look at Greenmanville
With the opening of the new Thompson Exhibition Building at Mystic Seaport, a new era in exhibiting has certainly dawned on the Museum. The 5,000 square foot exhibition space will play host to some extraordinary displays for years to come. However, the gallery space is currently a blank slate waiting for its first installation. In the meantime, new Senior VP for Curatorial Affairs, Nicholas Bell, worked closely with the Exhibitions and Collections Departments to make a bit of a splash in two areas of the new building. The first is in the lobby where a 59-foot-wide mural by artist Nikki McClure graces the space above the entry to the new Collins Gallery. The second, pictured below, is located in the new Masin Conference Room, overlooking the Mystic River and is an exceptional photographic panorama of Greenmanville, the area of Mystic in which Mystic Seaport is found.
This picture was taken by a gentleman named Everett Augustus Scholfield, a photographer from Mystic, CT in business from 1865 to 1913. By the time this picture was taken in 1874, Scholfield was a well-established photographer in the area, specializing in portraiture, landscapes, architecture and maritime vessels.
Scholfield was innovative and artistic and used various processes to produce his images over time. The image above was made from a large glass negative in the collection of the Museum. The negative was produced using the collodion process, a method that had many advantages including being able to produce multiple images from the same negative, unlike a daguerreotype. The detail achieved through the use of this process, and the extended exposure time, is quite impressive. The absence of people in the photograph is explained by that exposure time. In a few areas, "ghosts" can be seen as people move in and out of camera view while the glass plate is being exposed.
Achieving a "clean" picture to print in such a large format was achieved through the magic of Photoshop and the diligence of one of our photographers, Joe Michael, removing every imperfection in the plate that has deteriorated over time. It is a nice touch to ring in the new with a reflection of the past.
Author: Unknown
Female Slavers. A Prize Article Winner.
Each year, the Fellows of the G.W. Blunt White bestow a prize upon the author of the best article written in CORIOLIS: the Interdisciplinary Journal of Maritime Studies. This $1,000 prize is named in memory of the former Director of the library and head of publications, Gerald E. Morris. The Morris prize this year was given to Maria Vann for her article in the Volume 5, Number 1, 2015 issue entitled Sirens of the Sea: Female Slave Ship Owners of the Atlantic World, 1650-1870.

A graduate of the Cooperstown Graduate Program in Museum Studies, Ms. Vann is currently the Director of the Marine Museum in Fall River, Massachusetts.

Ms. Vann notes that throughout the active years of the transatlantic slave trade, some European and American women gained economic and social influence by involvement as participants in the slave trade. They challenge the dominant narrative that the slave trade was practiced exclusively by white men. Her article focuses on female slave traders from Britain and American colonies during the period of 1650-1760, with a concentration on New York, the former Dutch colony that fell under English rule after 1764.

Her research is largely based on review of the Trans-Atlantic Slave Trade Database, slave ship records, newspapers, journals, court records and diaries. Sources were evaluated with intentional focus on women who were previously overlooked. The existence during the early years of the transatlantic trade challenges common notions about both gender and the slave trade and additionally raises important questions about the role of women slavers in other times and places.

A fascinating study, this article is a well-deserving winner of the Morris Prize Article Contest.

Author: Unknown
The Art of the Sea (and Harbors)
The Little Sea Torch, published in London in 1801, was a translation of a French book of sailing directions entitled Le Petit Flambeau de la Mer. The author of the translation, John Thomas Serres, was the son of marine artist Dominic Serres and a very accomplished marine artist in his own right. 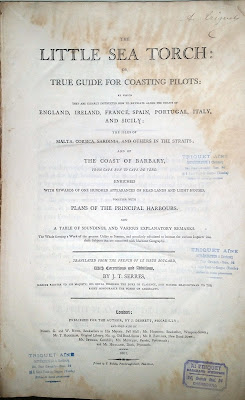 Serres the younger dedicated the volume to The Right Honorable Earl Spencer, then the First Lord of the Admiralty and one of a number of influential patrons he would have, including both HRH King George III as well as his son the Duke of Clarence. The book, as can be seen from the title page, described the coastal waters and ports of England, Ireland, France, Spain, Portugal and the Mediterranean region. In addition to the text, Serres illustrated many of the ports in multiple views. Below are just two illustrations among many, these showing a view of the harbor of Naples along with a chart of the Bay of Naples, both executed by Serres.

This book in the collection of the G.W. Blunt White Library at Mystic Seaport is just one of many illustrated works on charts, maps and sailing directions, some dating to the mid-17th century. We are fortunate to have had our own patrons over the years to donate such items to our collection and we look forward to adding more such treasures in the future for use by the many researchers who make their way to our collections.
Author: Unknown
Shake, Rattle and Roll. The Ship IDA in Valparaiso, 1822.
The Museum recently acquired a logbook of the Boston ship IDA from 1821 to 1823. The IDA was built in Amesbury, Massachusetts in 1816, and at 115 feet in length and 28 in breadth, she was almost the exact size of the Museum’s own CHARLES W. MORGAN. The following events in Valparaiso, Chile in November of 1822 were the last recorded for the ship, except for a note in the back saying the ship was sold in March of 1823. The customs house in Boston lists the documents for the ship as being returned after the vessel was sold in Buenos Aires in November of 1823.
While sailing from Boston towards the Northwest Coast beginning in 1821, the IDA  was standing a mile or so off of Valparaiso on the 20th of November 1822, when : "At 11 P.M. We was suddenly alarmed by a violent shock that effected the ship as if she had struck the bottom, all hands sprung on deck and cried out the ship ashore, we tried the pumps and hove the deep sea lead, found no water in the ship, nor bottom with 50 fathoms of line, it so much resembled a ship drawing over a coral bank that I was induced to heave the lead, but on reflection knew it was impossible for her to have struck any bottom in so heavy a sea as was on at the time without bilging the bottom in. I then thought of a wreck of a vessel but lastly I imputed it to an earth quake." Prior to the earthquake, on November 18, the captain had sent a boat ashore at the mouth of the River Maipo at San Antonio, and with much relief  brought the boat back aboard on November 22. "They got on board and informed us that there had been a heavy shock of an earth quake on shore and that Valparaiso had been nearly destroyed and had lost 23 lives in the fall of a Castle.  St. Jago & several of the towns in the interior had suffered severely the inhabitants about the sea coast fled to the mountains for safety fearing that the sea would flow in upon them, animals of every kind on shore appeared to be affected by the shock."
Maria Graham, the wife of a British naval officer residing in Valparaiso during 1822 wrote of the same earthquake and its stressful effects on animals as well in her published journal. “The house received a violent shock, with a noise like the explosion of a mine. I sat still; and Mr. Bennet, starting up, ran out, exclaiming, “An earthquake, an earthquake! For God’s sake follow me!”…The vibration still increasing, the chimneys fell, and I saw the walls of the house fall open.” She continued, “The motion of the earth changed from a quick vibration to a rolling like that of a ship at sea.” As to the animals, “Amid the noise of the destruction before and around us, I heard the lowings of the cattle all the night through; and I heard, too, the screamings of the sea-fowl, which ceased not until the morning.”
While this was one of a number of major earthquakes in the same exact area over the last 200 years, there are few recollections in English of the quake, so this particular view by a sea captain may very well be unique.
This area of Chile is regularly wracked by earthquakes and has seen some of the strongest in history. Thirteen years after the earthquake described above, another earthquake to the south of Valparaiso in Chile was described by Charles Darwin. He arrived in Talcahuano about two weeks after the earthquake and visited Concepcion, the site of the quake. The chart of Valparaiso Bay below was surveyed and drawn by officers of H.M.S. BEAGLE at that time in 1835.
Author: Unknown
Photo Gramma What??
No, this has nothing to do with sweet ol’ granny sitting for her family portrait. Rather it has everything to do with taking advantage of new technologies in imaging to give virtual (and actual) visitors a more complete view of an object than they could get seeing it laying in a traditional museum display case.
Photogrammetry is the term. Photogrammetry is a photographic technique used in measuring distances with cameras, oftentimes for aerial maps and the like, but many museums are using the process (in concert with other scanning procedures) to create visual virtual 3-D models of objects.
If you click on the above image it will take you to a 3-D model created by the Rhode Island company named The Digital Ark. The Digital Ark did some tests using a photogrammetric method to create the image you see. They used well over two hundred images of the piece of scrimshaw and stitched them together with software to make a 3-D version of the tooth that can be spun in space and viewed from all sides, giving us the opportunity to display things in an entirely new fashion.

View the tooth in full screen mode by clicking on the two diagonal arrows. Rotate it in space by manipulating the image with your computer mouse or touchpad.
Given to the Museum in 1941 by trustee and collector H.H. Kynett, the tooth in question has on one side patriotic symbols including an American eagle, a shield and cannons with the motto "E Pluribus Unum" and some stylized roses. The other side has an anchor, a 3-masted ship with guns, and a banner displaying the words "Success to our Navy."
While we are just in the test stages of working with this time-consuming process and technology, we feel it offers tremendous opportunities to show visitors many different types of objects in their entirety that they would not otherwise be able to experience. Wish us luck!
Author: Unknown Reproductions from the Collections